In 2012, President Obama issued the Deferred Action for Childhood Arrivals (DACA) program, which protects over 800,000 undocumented immigrants from deportation as long as they prove that they arrived in the US before they were sixteen.

DACA does not provide a pathway to citizenship for these individuals but grants them the right to stay in the US, apply for a driver’s license, a social security number, and a work permit. Their legal status is subject to renewal every two years based on good behavior. As of December 4, 2020, DACA has reopened applications for individuals not currently enrolled to apply for deferred action.

According to the Migration Policy Institute, around 1.8 million people qualify for DACA, but only 800,000 are currently enrolled. The following are the qualifications for eligibility to the program:

Be prepared to show documents that prove each requirement, as well as proof of identity. Applicants must also fill out two forms (I-821D, Consideration of Deferred Action for Childhood Arrivals, and I-765, Application for Employment Authorization) and a worksheet (I-765WS, Worksheet) to apply. Check the USCIS website to make sure you have the latest version of the forms.

As of January 2021 the application fee for DACA is $495. Applicants making less than 150% than the poverty line who are also in severe debt, have a chronic disability, or are younger than 18 and lack parental support may be eligible for the fee exemption.

Be sure to apply for a fee exemption before submitting the official request for DACA.

Can I travel if I am applying for DACA?

If you already have DACA, you must apply for advanced parole to travel. Do not travel if your application request is under review, as it might jeopardize or complicate the process.

What is happening with DACA now?

The Trump Administration automatically rejected new DACA and prohibited current recipients from applying for advance parole. On December 4, 2020, federal judge Nicholas Garaufis of the U.S. District Court in Brooklyn ordered the government to lift the restrictions placed during the Trump administration and restore DACA to its original form.

DACA currently is facing a new legal battle in Houston, Texas. The case is a continuation of a 2018 lawsuit against the constitutionality of the Obama-era version of the lawsuit. Texas, along with a coalition of eight other states, argues that DACA forces states to bear unfair financial burdens. Judge Andrew Hanen, who expressed concern for the unconstitutional DACA in 2018, is set to issue a ruling in early April 2021.

Get additional information about DACA from the USCIS website here. 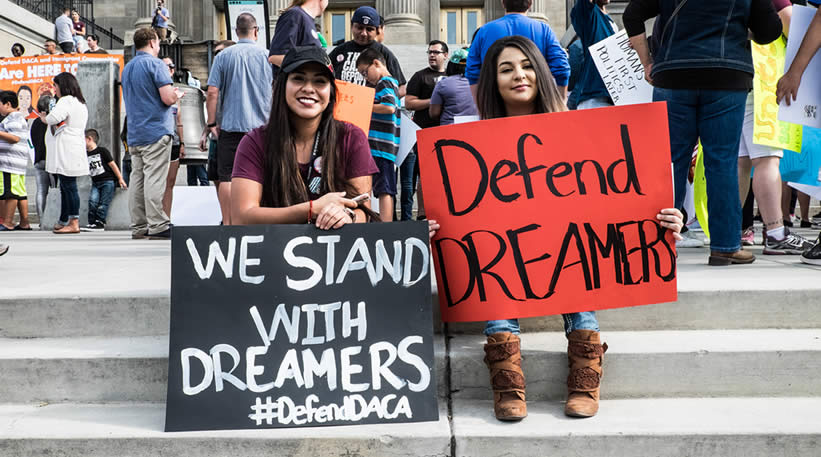 Ever since President Trump first attempted to rescind the Deferred Action for Childhood Arrivals, (DACA) program in 2017, the policy has become one of the most intensely debated topics in the country’s political and legal battlegrounds. What is DACA? Who qualifies? And what is happening now?